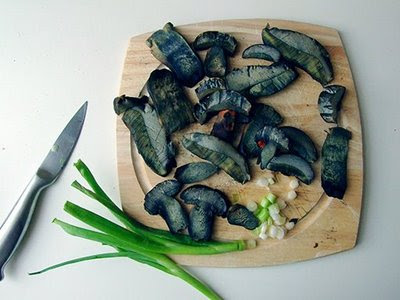 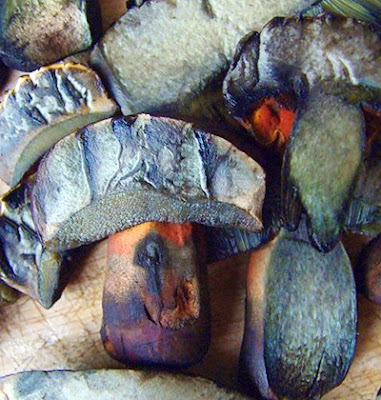 Boletus erythropus - a nice bolette which stains an intense blue when the flesh is cut. Disappointingly, the blue fades to nothing upon cooking, leaving you with a fairly ordinary looking mushroom dish.

Does that count as blue food? When it comes to blueness, raspberry flavoured Slush-Puppies are still hard to beat.
Posted by Wildeep at 10:56 No comments:

I found this mushroom on the web and had to share. Follow this link to see whats special about them.
Posted by Wildeep at 12:07 No comments:

I have a thing about blue food!


I've known about the beautiful colours produced when one combines egg yolk and red cabbage for years, but am only now starting to experiment. 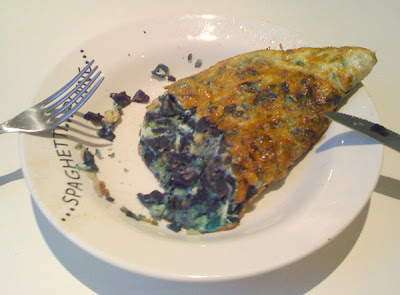 Here is the first fruit of my labours: an omelette made with fried, shredded red cabbage.


I think I may be able to get more intense colouration by leaving the mixture to stand for a while before cooking. It was also somewhat overdone - better over cooked than under cooked as a general rule.
Posted by Wildeep at 03:39 No comments:

Stick with the little fishes....

Ethical consumerism is hard - it requires one to be very well informed about all the companies with which one might transact, and such information is rife with embellishments and half-truths. But one rule of thumb I have come to adopt is 'go with the little guy' let me explain:
In the absence of any evidence to the contrary, smaller companies tend to be more ethically sound - a world replete with a diversity of small, specialised businesses would be better than one ruled over by a handful of gargantuan multinational corporations. So, all else being equal, choose the smaller of the two businesses to grace with your custom. The world will generally be a better place for it.

Examples:
- Try to buy your food from butchers, grocers, bakers, rather than supermarkets.
- Try visiting independent cafes rather than the Starbucks/Nero/Ben+Gerry's/McDonald's style chains.

Specific reasons why big corps are bad:
- They tend to have a centralising effect on revenue streams - they pay the local staff worse while directing most of the cash back to HQ: investors, overpaid execs and slimy marketing types. Investing in a local business is investing in the local area and local population.
- Large corporations tend to have their fingers in many pies - even if the arm of the company you are dealing with is impeccably ethical, your money will most likely underwrite atrocities committed by another division.
- Large corporations are almost all run for the benefit of shareholders - the execs are *duty bound* to do nothing which might harm share dividends and are therefore powerless to do anything good - and in many cases can't even prevent the corporation from pursuing actively destructive policies for fear of reducing dividends. Henry Ford was successfully sued by the shareholders of Ford Motor co. for trying to give his factory floor workers an 'overly generous' pay rise(!)
- Large corporations listen less to customers: a well written letter or a carefully placed word with the right member of staff can often times shape the actions of a small business.
- Small companies tend to be run by, and employ people, who know - and are often passionately interested in - their business. You are likely to get better service when buying a guitar from someone who is interested in guitars per se, rather than from someone who is only interested in guitars to the extent that such an interest can inflate their corporate stock value.
Posted by Wildeep at 09:22 No comments: