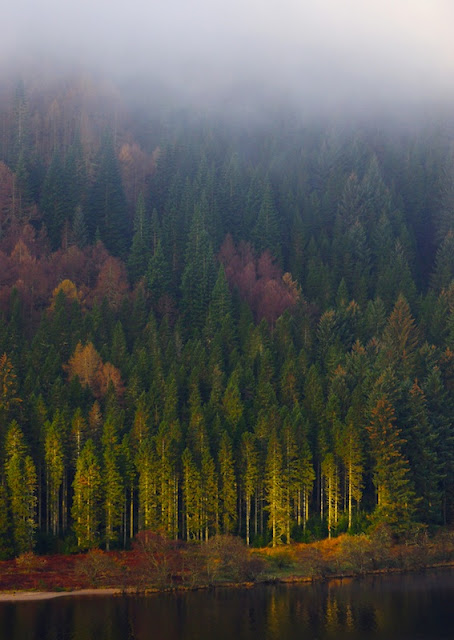 A pale, early morning sunbeam sneaks in beneath the freezing clouds resting on Loch Eck side, last November.

This marks my 100th photographic post. Wild Eep's Illuminations has certainly become a photoblog. I do like to think that other aspects of my work will soon emerge to balance the almost exclusively photographic nature of my recent postings.
Posted by Wildeep at 08:59 No comments: 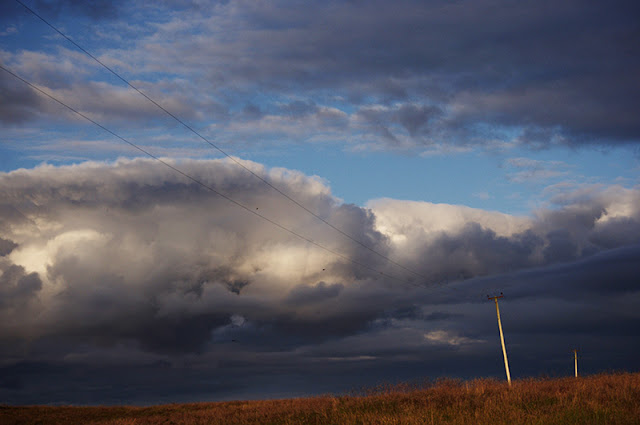 Just back from an overnight trip to Bute - beautiful weather. The main objective was to find glow worms on the southern tip of the island - I could find none, but could hardly call the expedition a failure - too many other wonderful experiences. 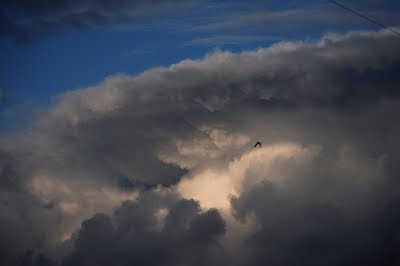 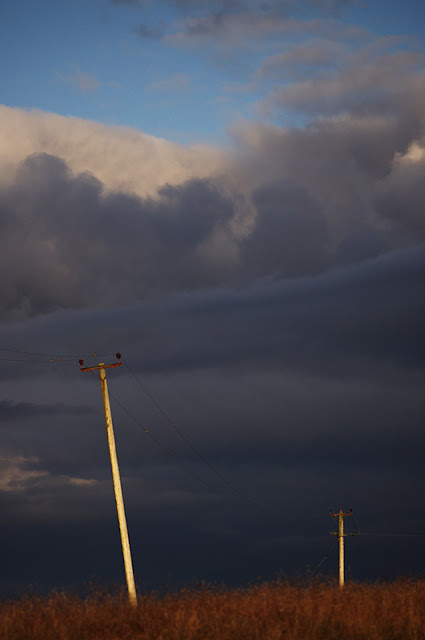 I used a modern bivy bag as a fair-weather alternative to a tent - sleeping out under the stars with the seals singing just off shore. On a warm July night with no midges, nothing could be finer.
Posted by Wildeep at 22:42 No comments: 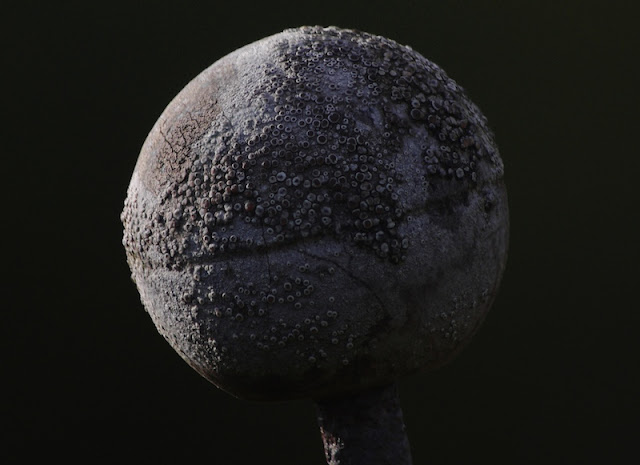 This one might need explaining - this is a rubber tipped metal rod sticking out of the top of a wooden post high on a hillside - the post marks where a quadbike track starts that can take you down off the hill. The rubber cap is about 3cm in diameter. I imagine there may have been some kind of flag attached to the pole when it was new.
Posted by Wildeep at 08:35 No comments: 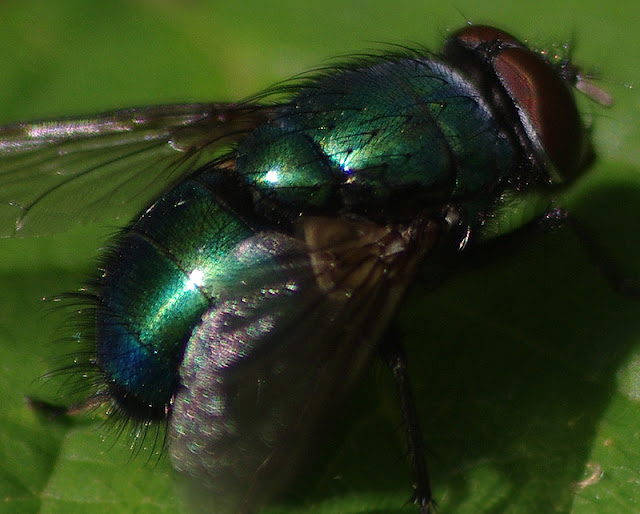 ...and very, very shiny! I've been told they do really horrible things to toads, so I can't approve of them unreservedly...
Posted by Wildeep at 22:51 No comments:

I love carob! The trees are shady, shapely evergreens dotted around in many mediterranean lands. The tree's fruits are large pods, reminiscent of giant runner beans. 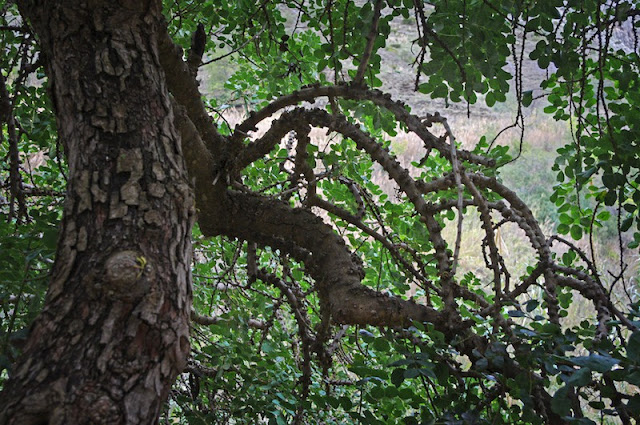 As a food, it gets a bad reputation from being used as a chocolate substitute, but as an ingredient in its own right, carob can be wonderful - it is dark and bitter-sweet and can be used as a flavouring in both savoury dishes and desserts. Curries, bread making and muesli can certainly all be spiced up with the addition of a bit of carob powder.
Posted by Wildeep at 09:19 No comments: 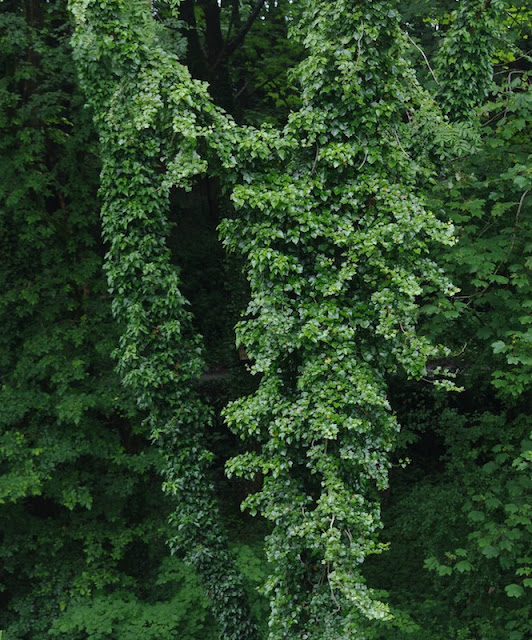 Can't see the trees for the leaves!
Posted by Wildeep at 06:37 No comments:

A small, white bracket fungus of rotting conifer wood. It exudes a milky fluid and has a highly astringent taste to it.
Posted by Wildeep at 08:18 No comments: 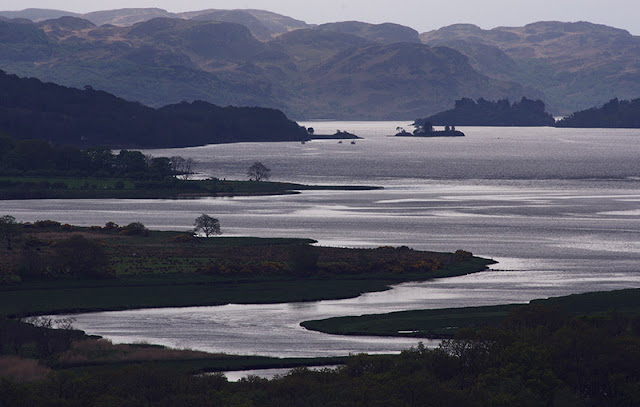 Trying to make dramatic landscape photos on a dull day - always hard work. The southern end of Glendaruel is one of my favourite landscapes, but I rarely get to visit when the light is conducive to photography. One day....
Posted by Wildeep at 16:03 No comments:

Fencepost of the Week #21 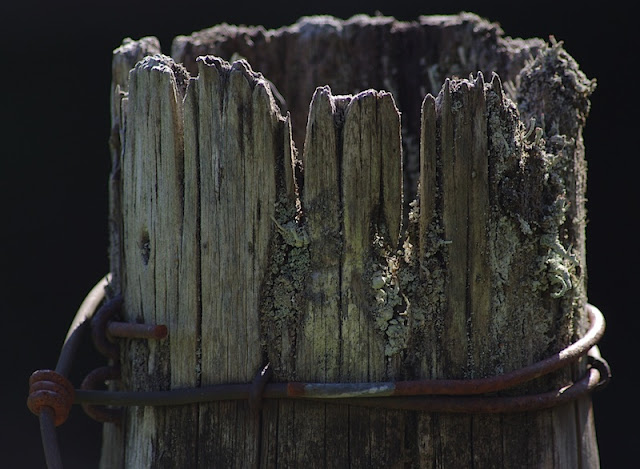 
Hingle looked up from what he was eating and beamed. He was so fat! His sides felt like they were stretching - giving a little more each time he breathed - little, painful jerks that were somehow so delightful.

"I must weigh nearly as much as Yolanda by now!" he exclaimed to any that would listen. The others were mostly too busy chewing away to notice, but Fredkin, who was also taking a breather, looked over.

"How is Yolanda, anyway - I haven't seen her in days." he asked.

Hingle's brow furrowed. "I haven't seen her either."

He made a mental note to look in on her on his way home this evening, idly popping a morsel or two in his mouth as his thoughts gravitated towards her: Yolanda. He loved her - always had - they had grown up together, she was the natural leader in all their games and adventures. They had explored and foraged together over the whole length of this great land. Surviving through many scrapes and dangers - always learning, always growing. He was eating again, wolfing the food down as fast as any of his peers, and became absorbed once more in his repast, forgetting all else.

That evening as he staggered towards his home, he felt a little strange - stiff - not in the the usual, turgid way that was to be expected after a good feed, but more... well, woody. And rather than simply feeling sated, his appetite seemed now to be somewhat diminished.

"I hope I haven't eaten anything disagreeable..." he muttered to himself "Oh my! What's that!?" Dancing before his eyes, came the most amazing and beautiful sight he had ever seen - a tall, willowy, seraphic creature all radiant colours and delicate arabesque curves. It alighted with grace on the path before him - Long, plumed brows quivering on the night air. He was enraptured, it was... it was - how could it be?! It was Yolanda!

He gazed full upon  her face - long curving profile, sculpted cheeks, lustrous, magnetic eyes that held every colour within their deeps. Powerfully swept wings cascaded round her delicate, sequinned form. So alien, so achingly beautiful - and yet, in some way it was still his Yolanda.

Her wings vibrated - an effusion of energy. "Yolanda!" he cried. Her head cocked, birdlike, to one side: she had heard him; those eyes must surely have seen him, but there was no recognition in that flawless visage. It had a feral, wild look. A susurrous sigh escaped her - redolent of desires and passions that were, to Hingle, unknowable. He was baffled - how could she not see him? He called out again, but she was looking to the starry sky. For an instant all was still, then in a kaleidoscopic tumult of colours she launched into the sky, flitted and was gone.

He blinked - the vision had passed. Had what he had seen been real? Breathless with foreboding, he scurried off, directly for Yolanda's abode.

There, in the shadows, was something - a crumpled heap lying on the floor. It was like a complete set of clothes, shrugged off and cast aside in  a oner. And there was a rounded, dreadfully familiar object beyond. Hingle approached - it was shrivelled and cracked, but it was recognisably Yolanda's head lying there in the corner. Clouded, sightless eyes, papery skin - the expression on her face not one of pain or distress - it was a grey mask of bland forgetfulness. Hingle cradled the beloved visage to him, but this inert lump of dead matter gave no comfort - Yolanda was gone. This had to be a nightmare. He backed out of Yolanda's place and fled into the night.

Distressed as he was, Hingle's tiredness was getting the better of him. He yearned to be home, curled up, asleep. A desperate and unrelenting need washed over him - it pained him to still be awake.

As he reached his abode, he caught a glimpse of something peculiar in an adjoining dwelling. Where his neighbour Thripsle should be resting there was instead a monstrous, ribbed, leathery bag - it glistened slickly in the moonlight and something writhed and transformed beneath the taut surface. Hingle stepped towards her threshold. The bag heaved.

"Thripsle? Are you in there?" he enquired of the dark. The bag heaved again and Thripsle's head dropped off the top of it, rolling - lifeless - across the floor.

Hingle was too sick and tired to run this time, he turned, staggered to his home, took one final look around with his terrified, disbelieving eyes, then curled up on the floor - and sank into warm, welcome oblivion. 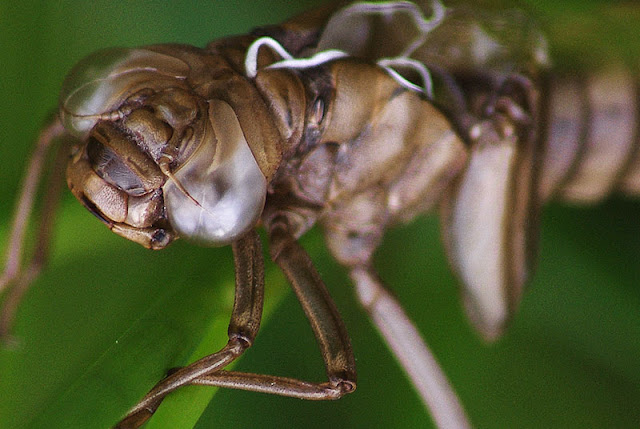 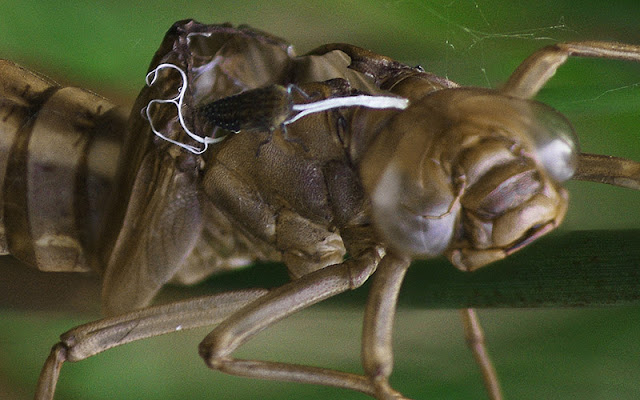 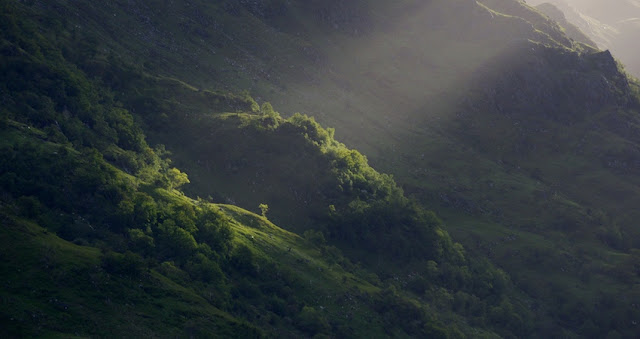 Continuing the crepuscular rays theme from Sunday. Again this photo was taken from the JMT work party campsite on the shore of Loch Hourn.

As this amazing blog points out so eloquently, you don't have to journey for days into the wilderness to reap the benefits of an appreciation of nature.
Posted by Wildeep at 08:27 No comments: 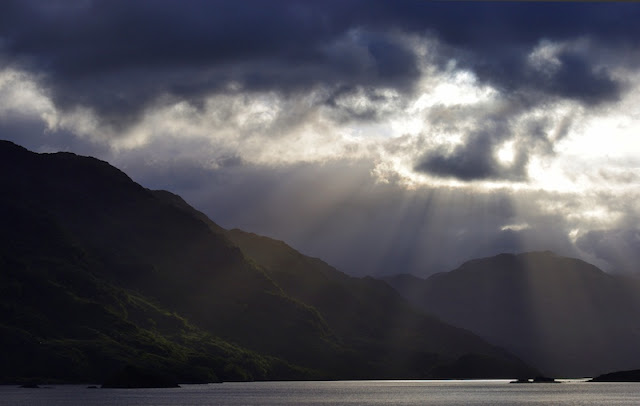 More views of Loch Hourn from the JMT work party in May. This time celebrating crepuscular rays. 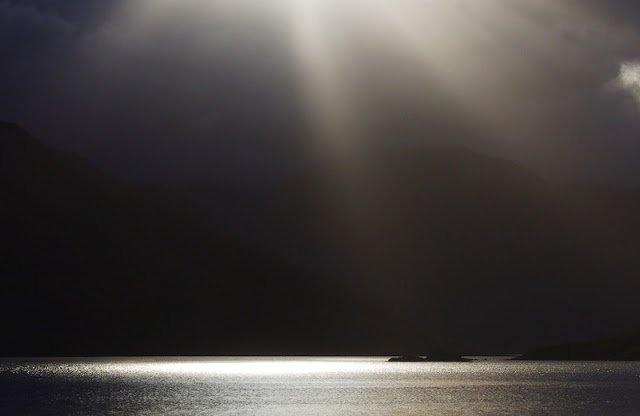 Fencepost of the Week #20 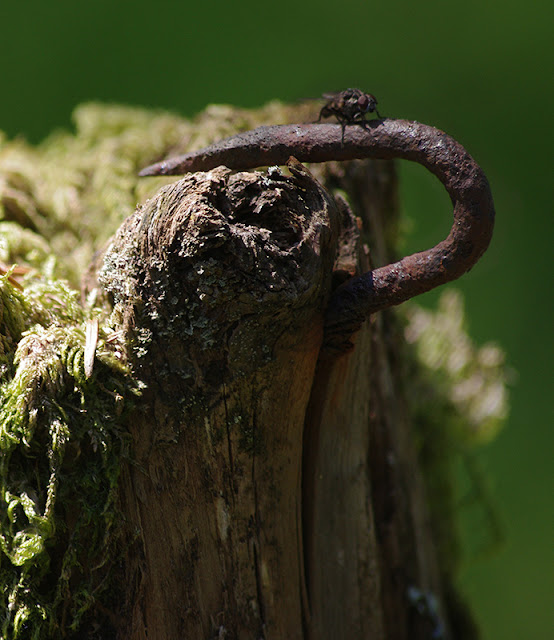 I've been getting really up-close and personal with some insects recently - pics coming soon! :-)
Posted by Wildeep at 09:06 No comments:

Fencepost of the Week #19 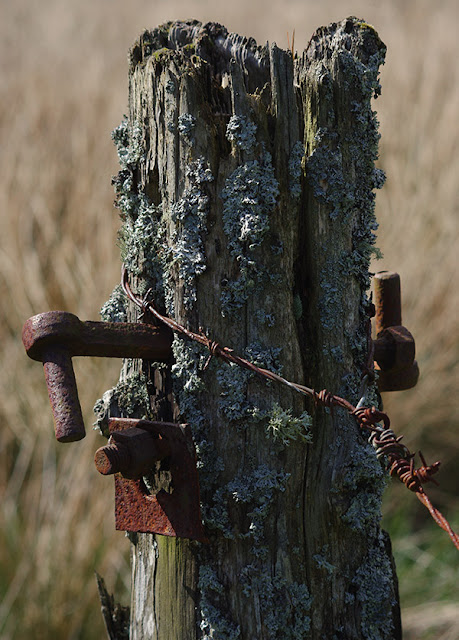